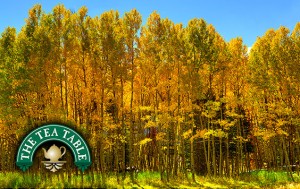 With 2016, The Tea Table starts its 16th year in business, and I can’t help but look back on how much tea has changed in that time.  One of the main things that has always attracted me to tea is how pure it is.  It’s light, delicious and simple.  That’s really the beauty of tea for me.  Because of its simplicity, it’s really best in its most pure form, loose leaf.  There’s no need for fancy, expensive packaging.  Just some dried leaves in a foil pouch.  Put some in an infuser, add hot water and you’re good to go.  You can add flavors, sweetener, even milk if you want, but you don’t have to.  In fact, tea is at its greatest when it’s just made with water and nothing else.  I know that’s not the way a lot of people make it, but I suggest giving it a try.  It might be a bit of an adjustment for those who are used to beverages with a lot of added flavors and sweeteners, but it’s worth the effort.

One change in the last 15 years is that tea has definitely grown in popularity.  Unfortunately, that’s not always a good thing.  With that popularity, tea is frequently losing the purity that’s at the base of its appeal.  Frequently, more effort and expense is put into the packaging than the tea itself.  I sometimes joke that with some teas, you might as well grind up the package and drink that rather than the tea inside.  This can be a difficult trend to resist, even though the idea behind The Tea Table, from the beginning, was to offer the best teas available at the most reasonable price possible.  A big aspect to achieving that is simple, inexpensive, yet effective packaging.  There is no better way to accomplish that than the resealable, foil bags we use.  They keep the as fresh as possible, even better than tea tins, and the cost is reasonable.

So, 15 years later, we remain determined to stay focused on our original goal.  To offer a wide variety of the best teas available at reasonable prices.  Clearly our customers recognize this, since lately we have been receiving more and more feedback saying things like “Thanks for not selling out” and “You offer such a wider variety than the other guys.”  To us, tea is about variety.  That’s why we continue to seek out as many variations and flavors as possible.  Why we offer not just one or two Breakfast Teas, but a dozen.  Most of which are our own creations.  Why we have not just a couple Oolongs, but (currently) eleven, both flavored and unflavored, with at least two more coming soon.  It’s also why we reject at least 95% of the teas we sample.  There are a lot of teas out there, but the fact is, most of them aren’t very good, and we’re here to recognize that and offer only the best.  Sometimes they’re good, but over priced, so they still don’t make the cut.  It’s what we’ve always done, and it’s what we’ll continue to do.

About The Tea Table

The Tea Table is a small, privately owned online tea store offering about 200 loose leaf teas, tea accessories, teapots, Tea of the Month Clubs and more. We personally select every tea based on quality and value so we can provide the best teas from around the world at reasonable prices.